Fox Leans On 'Empire' To Rescue It From Ratings Blues 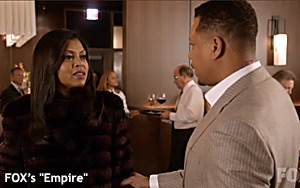 Beverly Hills, Calif. -- With big viewership declines over the last couple of years, Fox will be counting more than ever on “Empire” to pull it up from last place -- it will now be expanding into new music-themed dramas.

During the Television Critics Association meeting, Fox announced that Lee Daniels, co-creator of “Empire,” will debut a similar drama, “Star,” following three girls’ rise to the top of the music business. Dana Walden, chairman/CEO of Fox Television Group, says it’s a show that focuses on the “modern day music business in Atlanta.”

“Empire,” the midseason drama, posted unprecedented rising viewership week-to-week through its 12-episode season. Its first episode was at a Nielsen 3.78 rating among 18-49 viewers rising to 6.9 rating for its season finale.

For its entire first season, “Empire” averaged 5.1 Nielsen ratings among 18-49 viewers -- the best of all network TV shows this past season -- and 12.97 million overall viewers.

All that means good news -- especially for the traditional TV business, which for many has been circumspect among many media observers. “It’s a shot in the arm for broadcast,” says Walden.

“What we think is so special about broadcast -- you can really create a social and cultural event,” says Gary Newman, chairman/CEO of Fox Television Group. "Empire" benefited greatly from viewers tweeting and using social media. “Our viewers were doing the marketing for us.”

Fox is also moving more into limited series, which it says is good business, pointing to its summer limited 10-episode series “Wayward Pines.” “Pines” averaged a 1.1 rating among 18-49 viewers and 3.8 million overall viewers.

Fox will bring back Fox TV series “Prison Break” as a limited 10-episode effort complete with most of the major actors/characters.

Later this year, returning Fox shows -- “Bones” and “Sleepy Hollow” -- will be doing a special crossover episode. As previously announced,“The X-Files” is coming back as a limited series.