Fido Did It: Honest Kitchen Wants Pets To Confess 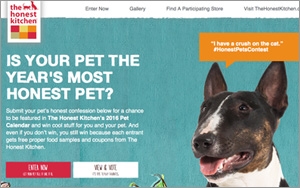 Now, RTO+P is introducing its first effort that plays off the brand's honest moniker by searching for "the year's most honest pets."

"We were asked to concept a creative campaign for The Honest Kitchen that drives trial -- something that's inherently unfamiliar in the pet food space," says Steve O'Connell, ECD and Managing Partner, RTO+P.

"The notion of whole foods for pets is new and educating consumers on the value of human grade food is also new. Put simply: dehydrated, organic food like Honest Kitchen’s product is nontraditional in an industry filled with kibble," he adds.

Pet parents can also enter on social media using the hashtag #HonestPetsContest on Instagram or Twitter and by uploading directly to the company’s website. After entering, they also will receive free samples and coupons.

These pet confessions will be posted where viewers vote for their favorite confession. Current submissions include a dog at the beach under the confession, "I buried your keys somewhere around here." A dog in a very messy room saying, "I told you I was not a good puppy sitter." And a Chihuahua that says "I bark at nothing and I know it."

The top five fan favorites will receive Honest Kitchen care packages worth $300, while one grand prize winner receives a trip with his or her pet to San Diego to tour the Honest Kitchen offices and stay at a pet-friendly hotel. The pet will also be featured in The Honest Kitchen’s 2016 Pet Calendar.

This theme of trust will continue in upcoming advertising messages.

"Honesty is our differentiator; it’s how The Honest Kitchen makes good, human-grade food for pets," says O'Connell. "The company believes that pets deserve proper food. In a category known for over-the-top cuteness, we want to show an honest view of what it’s like to love your pet, come what may."