Dannon Danimals, Quaker Launch Promotions With Fuel Up To Play 60 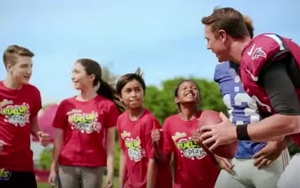 Dannon Danimals and PepsiCo's Quaker are among the brands sponsoring new promotional programs with Fuel Up to Play 60, the in-school nutrition and physical activity program launched by the National Football League and the National Dairy Council.

Created in collaboration with the U.S. Department of Agriculture, Fuel Up to Play 60 helps more than 73,000 U.S. schools improve their environments in order to help kids be active for at least 60 minutes a day and make nutritious eating choices.

In the Danimals national retail promotion, kids or parents who find one of six "golden" Danimals Bongo bottles or "golden" squeezable lowfat yogurts placed within 19 million specially marked packages distributed in the U.S. (or among game pieces that will be distributed to "no purchase necessary" entrants) will each win $5,000 to help their schools implement the Fuel Up to Play 60 program.

The six winners will also be given the opportunity to hold a field day with NFL players at their schools.

Both Dannon Danimals and Fuel Up to Play 60 are NFL sponsors.

The promotion is being supported by a 30-second TV spot featuring Atlanta Falcons quarterback Matt Ryan, New York Giants wide receiver Odell Beckham, Jr., and Disney stars Rowan Blanchard of "Girl Meets World" and Jake Short of "Mighty Med." The spot will air from Aug. 10 through the week of Oct. 12 across Disney XD, Nickelodeon and Cartoon Network channels in addition to Hulu, ABC Family and other digital channels. The TV spot is also embedded in the promotion's Web site and posted on YouTube.

In addition to in-store promotions, a social media campaign targeting parents and fans of the celebrities in the TV spot will span paid and owned channels. The celebrities began posting about the promotion on Aug. 7. A Facebook-based paid social campaign begins the week of Aug. 9 and will run through at least October.

Quaker's promotion features retired NFL star Emmitt Smith and centers on a social media sweeps running from Aug. 10 to 14. Consumers enter by following @Quaker on Twitter and sharing their families' favorite ways to fuel up for the start of the school year. Tweets must use the designated hashtags #QuakerBTS and #sweepstakes.

The prizes are 1,000 back-to-school fuel packs with Quaker products and a Fuel Up to Play 60 football, and a grand prize of having a video chat and getting personalized advice from Smith, as well as tickets to an NFL game.

Quaker will also be offering kids and parents advice to help smooth the back-to-school transition.

In July, Quaker was a premiere sponsor of Fuel Up to Play 60's annual Student Ambassador Summit in Chicago, during which 150 students from across the country gathered to develop leadership, teamwork and communication skills to help support the physical activity and nutrition goals at their schools.