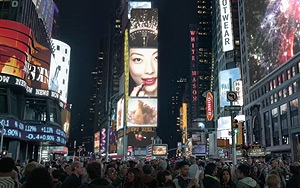 Having finally completed its acquisition of DirecTV, AT&T is wasting no time showing off how the addition points them — and their customers — to the future.

“We have the opportunity to create a new category, build new products and services that will truly delight customers, and become a company unlike any of our traditional competitors,” Kevin Peck, AT&T’s vice president of global brand strategy, tells Marketing Daily. “We’re going to roll out simple, integrated packages of video content, mobile and high-speed Internet services to millions of new customers.”

A new commercial from Grey New York will air during the PGA Championship this weekend. The commercial illustrates how the combined entities can offer entertainment to anyone, anywhere, on any screen.

“We want to clearly communicate that AT&T and DirecTV are now one, and that’s great news for consumers, as it will allow them to combine entertainment and mobility unlike ever before,” Peck says. “The tone is inspiring and exciting — it’s not only about what’s available today, but also what else is coming.”

The commercial begins in New York City, as people watch various content on their phones, televisions, tablets and the giant screens in Times Square. All of a sudden, all of the screens flicker out, and, after a moment, come back on with an iconic scene from the “Wizard of Oz” (“Toto, I have a feeling we’re not in Kansas anymore.”) The screens then change to scenes from “The Matrix,” “Star Trek,” and Derek Jeter’s final hit. (The spot also depicts more futuristic screens as well.) As a voiceover touts the combination of AT&T and DirecTV, the final scene from “Casablanca” is projected on a Manhattan building. Onscreen text reveals DirecTV is “now part of the AT&T family.”

After appearing on the PGA Championship broadcast, the spot will air heavily on broadcast and cable networks. The theme will be extended to newspaper, digital and print advertising. Grey is handling TV, radio and print for the effort, while BBDO New York is handling social and digital duties for the campaign.