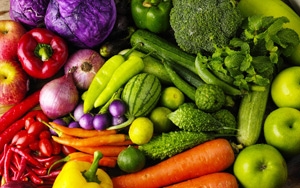 While the battle over whether to require labeling of foods and beverages that contain genetically modified organisms rages on, the growth potential of non-GMO products seems clear.

Out of a global retail food and beverage market of more than $5 trillion, non-GMO products accounted for $550 billion in 2014, according to a new report from market research publisher Packaged Facts.

Packaged Facts projects that non-GMO U.S. sales will see a compound annual growth rate (CAGR) of 2.5% and 65% cumulative growth between 2014 and 2019, to reach $330 billion. Global non-GMO sales are expected to nearly double, to $1 trillion, by 2019, thanks to an eye-opening CAGR of 15% — although the U.S. will still have a share of about one-third.

Those numbers in part reflect a steady, ongoing increase in the number of non-GMO products. Non-GMO product launches in the U.S. alone are now estimated at about 2,000 per year — up from just a few hundred a decade ago, reports Packaged Fact research director David Sprinkle.  The launches are taking place in both retail and foodservice.

Both launches and sales increases for existing non-GMO products are, of course, being driven by consumers' demand for foods with fewer additives, which are viewed as more “natural,” although "natural" has yet to be officially defined by either the Food and Drug Administration or the U.S. Department of Agriculture.

The report estimates that organic and natural foods —  which are linked to non-GMO in consumers' understanding — accounted for 60% of 2014's non-GMO U.S. sales last year, and will account for three-quarters by 2019.

If non-GMO foods and beverages have a seeming demand advantage going forward, does that mean that GMO labeling would serve to further depress sales of traditional CPGs that include such ingredients?

Pro-labeling groups maintain that that fear is the major reason that large CPG makers and agribusinesses formed a coalition and are spending millions to lobby for the "Safe and Accurate Food Labeling Act" (dubbed the "Deny Americans the Right to Know" or DARK Act by labeling advocates). The coalition, however, says that it is backing the bill — which would block states and localities from implementing mandatory GMO labeling — in order to avoid the creation of a "patchwork" of state labeling laws that would generate burdensome business costs that would ultimately drive up consumer costs for food and beverages.

Labeling supporters contend that GMO labeling is not meant to be a "warning" to consumers. Some cite a five-year study by an economics professor at the University of Vermont — the first state to pass a mandatory (not yet implemented) GMO labeling law — indicating that there is no warning or deterrent effect. The study found that, at least among Vermont residents, support of GMO labeling was not correlated with influencing existing attitudes toward GMO ingredients, whether those attitudes were positive or negative.

To lobby for Senate support for its federal bill, the coalition has just begun running a TV campaign in key states.

As the Packaged Facts report points out, GMO and GMO labeling issues are complex; they are being hotly debated in social and political spheres across the globe, not just in the U.S.; and they are not likely to be laid to rest in the foreseeable future.

For estimation purposes, the report defined non-GMO products as any that do not include ingredients made from crops such as corn, soy, or canola that have been genetically modified in order to make the more pest-resistant. It also included products that are derived from animals that have been fed on a diet that included ingredients made from GMO crops.