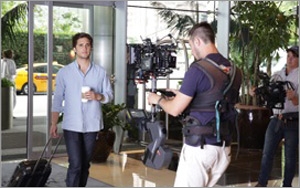 Diane Guerrero (“Orange Is The New Black,” “Jane the Virgin”), Diego Boneta (“Scream Queens”), and Boyce Avenue (YouTube music sensation) use the hashtag #LoveTravels to encourage  travelers to explore their personal passions, and celebrate their unique perspectives and experiences.

The stories from the new #LoveTravels ambassadors reflect how travel is a transformative experience and a bridge between cultures, careers and families. Diego, Diane and Boyce Avenue discuss what it means for them to be both Latino and American, their passion for human rights and the empowerment of the Latino community.

“Marriott embraces all and is dedicated to finding inspiring stories that illustrate how people pursue their dreams, and bring their passions to life when they travel,” said Stacey Milne, vice president, portfolio marketing strategy and planning, Marriott International, in a release.

Although the campaign was not intended to be a response to the recent hot-button issues around immigration, Marriott is taking this opportunity to support the Latino community who inspired the #LoveTravels campaign through their dedication to family, work, love, and diverse cultures, according to a company spokesperson.

Marriott enlisted LatinWorks, a full-service cultural branding firm, and photographer Braden Summers to create the campaign. From Aug. 17 through Oct. 31, the #LoveTravels videos can be seen on mobile and tablet devices through Pandora, YouTube, Facebook and Twitter.