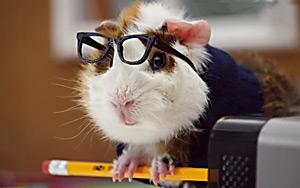 The new spot is the latest in the Minneapolis-based retailer’s back-to-school campaign. (There’s even an outtakes video, with the critters literally chewing up the scenery.) A company spokesperson says the ad — which is part of its current social media campaign — was created by Target in partnership with Denizen, with the goal of cutting “through the clutter by delivering memorable and differentiated content that makes guests smile and features some of our top back-to-school products.” She says the ad is scheduled to run through the end of this month on Twitter, Facebook, Instagram and YouTube.

And the company’s just-released quarterly results indicate its latest fashion snap may actually be on-Target. Second-quarter sales climbed 2.8% to $17.4 billion, up from $17 billion last year, with comparable-store sales gaining 2.4%. But more importantly, Target says comparable sales in the “signature” categories it’s deemed most important to its turnaround--style, baby, kids and wellness — increased at three times the company average, resulting in sales gains of between 4 and 5% in both home and apparel. E-commerce sales jumped 30%.

Net earnings soared to $753 million from $234 million in the same period a year ago, beating analysts’ forecasts. “We’re very pleased with our second quarter financial results, as traffic growth, strong sales in our signature categories and continued expense discipline drove better-than-expected profitability,” says Brian Cornell, chairman and CEO of Target, in its release. “Looking ahead, we are focused on making further progress against our strategic priorities and are committed to improving operations as we move through the important back-to-school, back-to-college and holiday seasons.”

New data from the National Retail Federation shows that Americans still have plenty of back-to-school shopping to do: It says that the average family with kids in grades K-12 has wrapped up just over half (50.4%) of the shopping, roughly comparable to last year’s pace of spending.

The study, conducted for the NRF by Prosper Insights & Analytics and based on more than 6,700 adults, says there are fewer procrastinators this year, with just 19.5% of the survey saying they haven’t started yet, compared to 23.6% last year. And 13.3% have already finished.