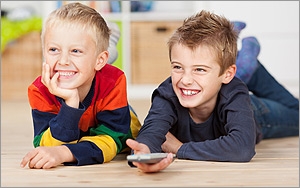 Although Viacom's ratings troubles seem to be focused on their programming issues, other networks have seen declines for kids TV content in looking at different age groups.

MoffettNathanson Research says Viacom has seen a 21% decline among 2-11 viewers over the past year, when looking at Nielsen live program plus seven days of time-shifted viewing from July 2014 to June 2015. In addition, there has been a 23% decline in 12-17 viewers and a 19% decline in 18-34 viewers.

“The continual decline in ratings for Viacom, and the rest of the cable network industry in general, has been nothing short of shocking,” writes Michael Nathanson of MoffettNathanson.

But he also adds that Viacom’s “ratings struggles among the youngest viewers appear more company-specific and reflective of a poor programming slate.”

Viacom has a 26% share of all 2-11 viewers on an industrywide basis; with Walt Disney networks commanding a 33% share (Disney Channel does not air regular TV commercials). After this comes Time Warner -- through its Cartoon Network and Adult Swim programming efforts -- with a 10% share.