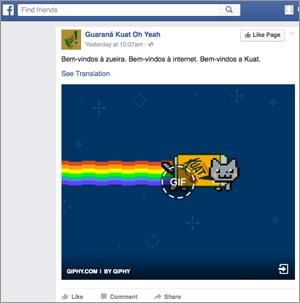 “GIFs can be a fun and compelling way to communicate,” a company spokesperson said on Friday.

On Facebook, GIFs have been supported for personal posts since May, but this new test marks the first time the format is being made available for Pages and advertisers.

For now, the experiment should only impact a small percentage of Facebook Pages, the spokesperson said. “We will evaluate whether [the test] drives a great experience for people before rolling it out to more Pages.”

These days, GIFs -- short for graphics interchange format -- are everywhere. Somewhere between a still picture and an animated video, the hypnotically looping formats have long since overtake the Web, including countless ad campaigns.

Adidas, for instance, recently offered users an embeddable GIF of their experiences interacting with a broader Boost campaign. “Boost Yourself” booth photographs were transmitted to virtual Boost capsules on the campaign’s visual wall.

For Facebook, the softening of its GIF policy is part of a wider effort to play nice with publishers and other Page owners.

Similarly, the social giant’s Parse unit recently began open-sourcing all of its software development kits (SDKs). Developers using iOS, Android and OS X can already go to GitHub to check out the newly released SDKs, while those using Windows Phone, JavaScript, and other operating systems will have to wait a bit longer.