Telcos Turning To Programmatic, But Need To Make Better Use Of First-Party Data

If Verizon’s recent acquisition of AOL -- which included AOL’s formidable ad tech stack -- was any indication, telcos are interested in programmatic advertising technology.

A new report from programmatic ad platform Rocket Fuel notes just how much interest there is between telecom advertisers and ad tech.

Rocket Fuel surveyed 32 telecom advertisers and marketers between the fourth quarter of 2014 and the first quarter of 2015 representing eight brands, including four of the top five telecom providers, per Rocket Fuel.

The company found that all respondents are already using programmatic tech for digital ad campaigns, and over three-fourths (78%) plan to boost programmatic ad spend in the next 12 months.

Data -- and the application of data -- is the only thing standing in the way. Rocket Fuel notes that about one-third (38%) are using first-party offline data to inform digital campaigns, despite the fact that over half have access to such data.

“As the majority of telecom customers will make a final purchase offline -- either over the phone or at a retail location -- telecom marketers are still missing a crucial piece of the puzzle for campaign measurement,” writes Rocket Fuel.

Telecom marketers seem to understand this, with nearly all (95%) saying they believe they can use their first-party data more efficiently. 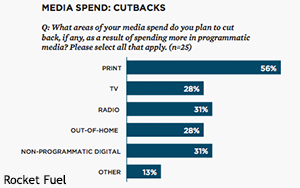 Of those that do plan to cut back, 56% say print advertising is where they will steal budgets from. Another 31% will cut back in radio to support digital programmatic, while 28% will cut back in television. Marketers will also cut back from non-programmatic digital channels (31%) and out-of-home (28%).

Some of those channels -- namely television, radio, and out-of-home -- are key branding channels, while programmatic digital is oftentimes associated with more direct response goals.

In fact, over two-thirds (69%) currently use programmatic primarily for direct response initiatives. However, half (50%) believe programmatic will provide more value for branding in the next 12 months.

It’s possible these marketers were leaving budgets in the traditional channels because they did a better job of supporting brand initiatives, but now that they believe programmatic digital can support those initiatives as well, they are divvying up the budgets.