Programmatic Marketers Still Catching Up To Consumers On Mobile

When it comes to where programmatic display ads are being served, new data from AppNexus reveals that marketers are still catching up to consumers on mobile devices.

“[T]he mobile revolution, while certainly accelerating, has not yet hit its peak,” writes AppNexus. “Even though consumers are now spending more than half of their online time on mobile devices, advertisers were still more likely to target desktop Web users than those using mobile apps or browsing the mobile Web.”

AppNexus contends that the discrepancy that exists between how consumers are using mobile devices and how marketers are targeting mobile devices “means that we can expect mobile to continue expanding at a rapid clip” as marketers keep playing catch-up.

With regard to which advertisers are buying programmatic ads, it's clear that the telecom industry is taking an interest in ad tech.

Real-Time Daily recently highlighted a new report from Rocket Fuel that found that most telecom advertisers and marketers are already using programmatic tech to manage digital campaigns, and that over three-fourths (78%) of them plan to boost programmatic ad spend in the next 12 months.

Behind telcos, alcoholic beverage marketers were the next biggest spenders, representing 11% of the U.S. programmatic display market on the quarter. Financial marketers (9%), automotive and vehicles (7%), and home and decor (6%) rounded out the top-five. 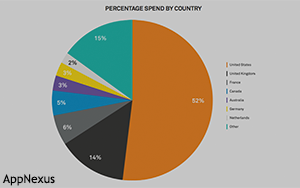 “Notably, while Automotive & Vehicles brands contributed to a relatively small portion of the spend in the U.S., the car industry was the largest spender in Europe, the Middle East and Africa (EMEA),” writes AppNexus in its report. “Additionally, Alcoholic Beverages did not even crack the top five categories in EMEA.”

The full AppNexus Q2 index report can be found here.