Violence On Video: It is The World We Live In 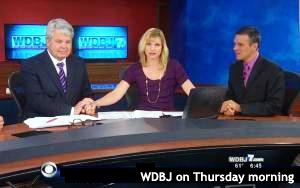 The videotaped murders of the two young newspeople in Roanoke on Wednesday have ignited the usual debate over what to show or what not to show -- on TV, on the Internet, on newspaper front pages.

For example, the New York Daily News published a front page on Thursday consisting of a headline in all caps -- “EXECUTED ON LIVE TV” -- with three sequential images showing reporter Alison Parker, 24, either getting shot or about to be shot (probably the latter).

Later on Thursday, it was reported that the News was being pilloried on social media for this sequence of screen shots. Detractors complained the pictures were tasteless.

On Friday, the News defended its Thursday front page -- emphasizing that it has been strongly vocal in favor of stricter gun-control legislation every time one of these multiple killings occurs. The News’ editorialists said the paper’s front page was conceived in order to emphatically drive home the point that this is the kind of incident that results when guns are easy to obtain.

But video clips not much different from this sequence of photos were shown continuously on TV all day Wednesday and Thursday. There were actually two sources of video of the incident: The video shot by the killer that came to light later on Wednesday, and the first video from the live news report that Parker and cameraman Adam Ward (who was also slain) were taping when the shooting occurred.

As happens in these instances, TV news organizations usually show such video right up until the moment the victims are actually shot. In the video of the live report that was played over and over on TV, for example, you heard the shots and heard Parker screaming, but you never saw Parker, Ward or their interview subject, Vicki Gardner (who survived), getting shot or the bloody scene afterward.

In this way, TV news producers in the immediate aftermath of such incidents seem to try and strike a balance between their obligation to report on a story using all the resources at their disposal (including video) and standards of taste that dictate they only go so far in their use of these resources. And so the decision was made to cut away just before the bloodletting.

It’s like the terrible videos emanating from scenes of violence around the world such as video from ISIS, for example, in which people are executed in all kinds of heinous ways and the video is then posted online. TV news reports on these incidents don’t show this video, although you can assume it all gets downloaded and viewed in newsrooms all over the world.

It reminds me of a story I sometimes retell at times like these, about a Pennsylvania state official who committed suicide on live TV. His name was R. Budd Dwyer, the state’s treasurer, and his televised suicide took place in January 1987 during a news conference he convened in his Harrisburg office on the day before he was scheduled to be sentenced on a bribery conviction. During the news conference, which was airing live on local TV stations in the middle of the day, he suddenly produced a .357 Magnum and fatally shot himself. With no delaying mechanisms in place, his bloody suicide aired on TV.

Later, evening newscasts around the country grappled with what they should show and most (and likely all) decided to show the video up until the moment he shot himself but not including that moment. I wrote a story about the incident for a TV trade paper I was then working for. While researching the story, I thought I’d try and see the video, so I arranged to watch it on a three-quarter-inch videocassette in the office of someone I knew at a local TV station in New York, WPIX/Ch. 11.

The point is this: To view this video, I had to take pains to make arrangements to see it in the office of a person who was reluctant to show it to me, primarily because he had already seen it and it was grotesque.

Here in the present day, however, anyone can view the suicide of R. Budd Dwyer with virtually no effort any time they want on YouTube, where it is widely available. I assume a tonnage of other such video is available there too -- shootings and killings caught on tape ranging from war zones to convenience-store “security” cameras (some of which is shown with regularity on TV newscasts with no discernible complaining from viewers).

While TV news organizations showed some degree of restraint when it came to cutting away from the Roanoke clips before they too became too grotesque to air on TV, you can bet that in the years to come, if not sooner, the unedited video of this incident will make it on to the Internet in some way or another.

content, news, tv, video
2 comments about "Violence On Video: It is The World We Live In".
Check to receive email when comments are posted.
Read more comments >
Next story loading