TCM Creates Tagline That Turns 'Movie' Into A Verb 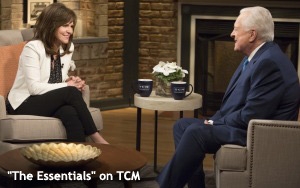 The problem is: The word “movie” is not a verb.

That’s the reason I cannot shake my negative reaction to a new tagline publicly unveiled today by Turner Classic Movies (and revealed to TV-beat journalists last week under an embargo). The tagline is “Let’s movie.”

If “movie” were a verb, I would be able to use it in sentences such as “I am going to go movie now.” Or “My wife and I were movieing the other day …” Or “Yesterday, it was raining outside, so I stayed in and movied.”

It’s an awkward usage -- so much so that if I were suddenly to adopt the word “movie” as a verb in the writing I do every day, readers and editors would question my intelligence and wonder if I’ve lost my mind.

I am aware of the grammatical license that is sometimes taken in the advertising and marketing businesses where the crafting of slogans and ad copy is concerned. At the same time, I’m reasonably certain that a healthy percentage of copywriters and sloganeers in these professions are also sticklers for correct usage. Perhaps this tension -- between the traditional “rules” governing language and writing, and the need to sometimes work creatively outside the boundaries of these restrictions -- is something that has long existed in the ad- and marketing-writing fields. It might even aid the creative process.

In this context, I get what TCM is trying to do: “Let’s movie” was conceived as an anchor phrase for “a new branding campaign highlighting [TCM] as the ultimate movie lover destination,” TCM’s press release said. The tagline’s brevity and its unusual application of the word “movie” -- expanding its scope from just a noun to a noun and a verb -- is meant to be memorable, catchy even.

Naturally, the new tagline serves a social media function: Hashtag #LetsMovie. “The focus of the brand campaign and tagline ‘Let’s Movie’ serves as an invitation to watch TCM as the ultimate gathering place for film fans to share the magic of the movies,” TCM’s announcement said.

The release continued: “TCM will launch a social media campaign -- #LetsMovie -- [comprising] daily social activities and fan engagement across Twitter, Instagram, Facebook, Pinterest and Tumblr, leading into a dedicated ‘LetsMovie’ holiday on Sept. 19 where TCM will encourage fans to watch films with family and friends and share their experiences via social media.”

Nothing wrong with all that. Two-word taglines are all the rage these days when it comes to TV brand-awareness campaigns. Some come across to me as ungainly -- Time Warner Cable’s “Enjoy better” and Syfy’s “Imagine greater,” for example.

Others manage the “two-word” trick more smoothly -- Oxygen’s “Very real” (signifying the channel’s reliance on reality TV shows), Chiller’s “Scary good” (evidently, the shows on this channel are frightening, or so it is hoped) and A&E’s “Be original” (a reference, presumably, to A&E’s original shows). By contrast, AMC’s two-word tagline, “Something more,” feels a little vague to me.

Whether ungainly, smooth or vague, none of these taglines anoint any of the words they use as something other than they are --  which is what TCM is doing with its noun-to-verb trick with the word “movie.”

TCM’s press release indicates that this new branding campaign is aimed at freshening the channel’s image at a time when so many other programming services -- whether on cable or online -- are leaping to the forefront with all the original scripted programming everyone talks about so breathlessly these days.

Fans of TCM are already well aware of this unique channel’s most attractive attributes. First and foremost, it is commercial-free. In addition, its movies are so wide-ranging that some go back a hundred years to the dawn of commercial cinema. TCM’s movies are shown in the best possible versions available and introduced with intelligence by either Robert Osborne (seen in the photo above with Sally Field) or Ben Mankiewicz.

TCM’s interstitial programming is second to none, including vintage movie trailers, theatrical short subjects from Hollywood’s Golden Age, biographies of the stars and other elements that make TCM one of TV’s premiere pleasures.

Maybe that’s the bottom line on this new tagline. TCM has long been an oasis for those seeking a destination on TV that fulfills their need for finding something smart to watch.

You might even say a concoction such as “Let’s movie,” which turns the word “movie” into something you do rather than something you watch, undermines a TCM fan’s desire to enjoy smarter.