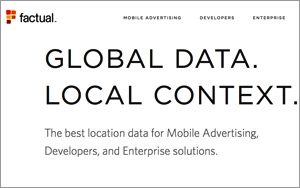 It wasn’t long ago that Apple Maps was the butt of many jokes (for example, check out the HBO comedy series “Silicon Valley”: “How bad is it? Don’t tell me it’s Zune bad.” “…it’s Apple Maps bad.” Gasp!).

But the company has slowly been reinforcing its initial product for the last three years, through various acquisitions, and a partnership with location data firm Factual.

Factual announced today that it has partnered with Facebook, and that Apple has extended its contract with them. Facebook plans to use the data in many features, including Facebook Business Pages, places search, Check Ins, and Place Tips.

“The idea behind Factual,” says Vikas Gupta, director of marketing and operations, “was if [a large number of smaller] companies band together, they can create a data cooperative that rivals that of the largest web platforms,” specifically data powerhouse Google.

Factual’s mission is to make data accessible to anyone who needs it, with a core focus on location data. As a neutral data provider, they do not produce any consumer-facing products or compete with their app partners.

Apple and Facebook, Yelp and Bing, and hundreds of other companies all subscribe to Factual’s Global Places data, which tracks non-residential places in 50 countries. As a part of many partnerships, those companies will also share data with Factual, allowing them to build a more accurate data set with each new client.

An example of the difference would be knowing the precise latitude and longitude of a user without knowing whether they were in a coffee shop or a hotel, or if that hotel had been demolished last month to make way for a coffee shop.

Gupta says that location data is Factual’s first priority, but it has always planned to expand into other data verticals, though that may not be soon. “We have an expansive definition of location data,” he says.