'VMA' Viewership Down, Digital Watching Up 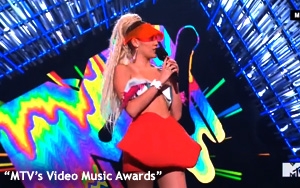 But when it came to digital streaming, the awards show racked up major gains: 19.1 million streams, for an increase of 155%. Other digital data: 21.4 million tweets, with a unique audience of 11.8 million, and 2.2 unique authors; and 39 million Facebook engagements.

The best traditional TV viewing numbers came in 2011 when the “VMAs” took in 12.4 million viewers. Before that, the best performance was in 2002, drawing an audience of 11.95 million.

In terms of competition on Sunday, AMC’s “Fear the Walking Dead” earned 8.2 million viewers for its second episode -- down 20% from its total viewer score for its series premiere episode a week before.