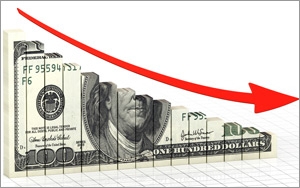 Both broadcast and cable TV upfront advertising spending continues to suffer -- broadcast TV now down for the third year in a row, with cable revenues now lower for the second year in a row.

In the recently concluded upfront TV ad marketplace for the 2015-2016 TV season, broadcast TV networks' prime-time spending sank 3.7% to $8.36 billion, with cable TV networks down 2.3% to $9.45 billion, according to estimates from media consulting company Media Dynamics.

Both broadcast and cable networks did witness slight increases in the cost per thousand viewers (CPMs) of adults 18 years and older. Broadcast TV networks were up 4.0% on average in prime-time CPMs to $24.40, while cable TV networks grew 4.4% to $13.34.

Ed Papazian, president of Media Dynamics, stated: “The broadcast networks have now lost ad revenues for three consecutive upfronts, which is something we haven’t seen before. And they are down a sobering 11% since the 2012-2013 season.”

Media Dynamics says broadcast networks increased CPMs by 61% over the past 10 years, with cable up 66%.

The upfront TV advertising marketplace, which takes place in the summer, is when major TV marketers purchase an estimated 70% of their annual commercial inventory before the TV season starts, and anywhere from 50% to 60% of cable TV inventory.