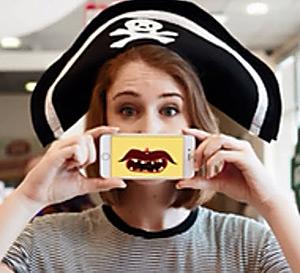 Columnist Dave Barry mentioned Krispy Kreme in a 2002 Miami Herald article on TLAPD, the made-up holiday’s first mass exposure. Krispy Kreme has run an annual TLAPD promotion since 2012, and it's become one of the chain's biggest days of the year, according to CMO Dwayne Chambers. With 2015's TLAPD falling on a Saturday — Sept. 19 — the brand saw potential for driving even more traffic with the promotion.

This year, the promotion will be supported not only on the brand's Facebook and Twitter channels, but with paid, geotargeted mobile advertising (via networks xAD and Conversant) to those within five miles of the 263 participating Krispy Kreme locations nationwide, reports the brand's agency, Raleigh, N.C.-based Baldwin&.

In addition, for smartphone users, the brand is offering a mobile site, dubbed the "ArrPhone," at www.krispykreme.com/arrphone.

There, fans can download any of 11 GIF-based, animated images of different kinds of pirate wear. They can then go into a Krispy Kreme store, call up one of the images on their phone screens, and hold the phone near the appropriate area of the body (tattoo near arm, or moustache near mouth, as shown above, for example) to count as one of the three pirate-wear items toward a free dozen donuts. (The other two items must be non-virtual.)

Previous years' TLAPD campaigns have been focused on social, videos and in-store promotions.

Krispy Kreme will again be selling its hand-decorated Kreme Filled Pirate doughnut on the "holiday," as well fountain drinks in reusable pirate cups and Talk Like a Pirate ceramic mugs. But Krispy Kreme isn't the only restaurant brand getting in on the TLAPD action.

Long John Silver's is offering a free fish tender or piece of chicken to customers who talk like a pirate on Sept. 19, and a free two-piece fish tender (or chicken) basket to those who don three pieces of (specified) pirate wear.