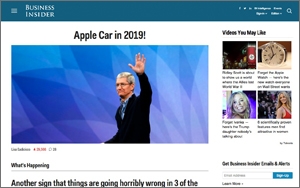 Axel Springer, the German publishing house that puts out Germany’s largest tabloid, Bild, is said to be considering buying U.S. online news publisher Business Insider, according to a report in Germany’s Manager Magazin.

The German publisher already owns a 7% stake in Business Insider, Manager Magazin reports, and could pay up to 500 million euros (around $560 million) to acquire a controlling stake in BI, according to unnamed sources from financial institutions. Springer had no comment on the rumors.

Springer previously led a round of investment that raised $25 million for BI in January. It recently endured an unexpected defeat at the hands of Japanese business publisher Nikkei in a bidding war for the Financial Times. The financing lined up for this deal, which was scuppered by Nikkei’s surprise last-minute entry, may now be used to fund other acquisitions in business media.

The company is also in the process of selling off its Russian publishing business, including the Russian editions of Forbes and OK! magazines, following new laws that restrict foreign ownership of Russian media.

Springer is especially interested in bolstering its digital publishing assets, per the same report. The Berlin-based publisher already has significant digital-only publishing experience: among other things, it owns half of Politico’s European operation.

Separately, Springer announced it has taken a stake in Jaunt VR, an American virtual reality company, along with ProSiebenSat.1, a German mass media company with broadcast, cable, radio and print businesses. Earlier this summer the Wall Street Journal reported that Springer and ProSieben were in early talks for a possible merger, but Springer denied these rumors.