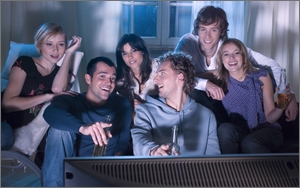 Between 6 a.m. and 6 p.m., TV accounts for half of all media use for weekday and weekends, according to Nielsen’s second-quarter 2015 Total Audience Report.

Time-shifted viewing remained the same -- an average 29 minutes per day for all U.S. adults over the age 18. When looking just at DVR users, usage time per day dropped one minute -- to 49 minutes from 50 minutes.

In terms of absolute digital video usage, the 9 p.m. hour showed the largest increase at 700,000 adult viewers or a 23% gain -- to nearly 4 million viewers, the highest of any hour. On a percentage basis the largest early morning hours, the 5 a.m. to 8 a.m. period grew the most, at 38%.

But TV also remains strong at 9 p.m. -- making up almost two-thirds of the overall media audience, says Nielsen. In May 2015, Monday to Friday media usage was the highest during the 9 p.m. hour -- 144.2 million adults 18 years and older.