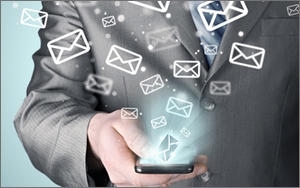 Consumers' strong attachment to mobile devices has helped spark the skyrocketing of mobile email use over the past decade.

Six out of 10 consumers admit they feel "extremely uneasy" without their smartphones, according to a recent study by Omnicom Media Group.

Furthermore, IDC Research reports that 80% of smartphone users check their mobile devices within 15 minutes of waking up each morning, and 79% have their devices with them 22 hours a day.

Such stats should speak to marketers. The use of smartphones to read email doubled between 2009 and 2013, per Pew, while Campaign Monitor reported a growth of 180% in mobile email usage from 2011 to 2014.

Yesmail Interactive says mobile made up 46% of all email clicks in Q2 2015, while Adestra, a London-based email technology company, found 45% of its email opens were mobile. Moveable Ink places the number even higher: 66%.

Google recently announced that 75% of its 900 million Gmail users access their accounts from a mobile device. That’s 675 million potential customers. Yet, many marketers still don’t optimize their email campaigns for mobile.

That decision can have a profound and negative affect on email marketing ROI. Seventy-five percent of Americans will simply delete emails if they aren’t optimized for mobile, per a Brafton study.

Conversely, MailChimp states that a responsive email design results in at least a 15% increase in clicks. Any email marketing campaign easily accessible across any screen can up open rates.