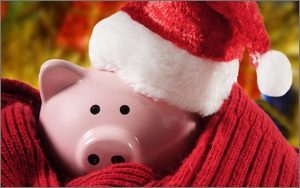 It’s the autumnal equinox, which in the world of retail means one thing only: ’Tis officially the season of Christmas forecasts, and Deloitte is predicting a spending gain of up to 4%. It says smartphone shopping behaviors are now so entrenched that digital interactions, including mobile, are likely to influence 64% of all in-store spending during the holiday season.

Overall, it calls for total holiday sales (covering November through January, and excluding cars and gasoline) to reach between $961 and $965 billion. (That’s below the 5.2% growth rate of 2014.) And it expects non-store purchases—those made either online or through catalogs—to climb between 8.5% and 9%.

The consulting company says sales during the fourth quarter are likely to be boosted by consumers’ increasing confidence in the economy. “An improving labor market, increasing home values and relief at the pump gave more Americans reason to believe the economic recovery was gaining real traction this year,” says Daniel Bachman, Deloitte’s senior U.S. economist, in its report. “Those recurring improvements helped buoy sentiment and spending over the past several months.”

Feeling good about housing and employment, he adds, tends to overshadow any nagging worries about an unstable stock market or instability overseas.

The report also says this year’s forecast paints a more complete picture of the many ways digital and mobile channels are shaping retailers’ holiday destiny, reporting that nearly 80% of people say they engage with either a brand or retailer “before setting foot inside the store,” the report says. “These interactions are retailers’ opportunity to engage shoppers seeking inspiration, reviews, product locators, or the option to buy online and pick up in the store. Retailers that are likely to come out ahead this holiday season are the ones connecting the dots between their digital channels and their stores – rather than focusing solely on the online ‘buy’ button.”