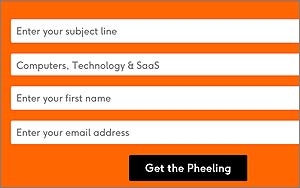 Phrasee Pheeling’s technology is developed from an algorithm that deconstructs the human language into five emotions: directness, curiosity, urgency, friendliness and offbeat. By analyzing the language, Phrasee states that it can predict how email recipients will respond to any given subject line.

“Understanding the subconscious emotional triggers that drive response is critical for predicting whether one subject line is better than another,” states Dr. Neil Yager PhD, Phrasee’s Chief Scientist and creator of Phrasee Pheelings.

Phrasee states that most of its current users derive from the events, travel, retail, e-commerce, publishing and beverage industries.

In lieu of payment for its free service, Phrasee is asking new users to donate to Syria Relief.
click-through, email, marketing
Next story loading