Is LA The New Center Of The Ad World? 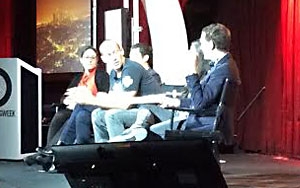 Is LA the new center of the ad world? An Advertising Week panel explored the question.

There are many signs that point to Los Angeles' emergence as a creative center from Jay-Z and Beyonce heading West, GQ magazine proclaiming LA's downtown as the next great city to several tech companies, such as Snapchat, deciding to locate in Silicon Beach.

Los Angeles straddles the worlds of technology and entertainment which presents a unique opportunity unlike other cultural hotspots, like New York, Paris, or London.

San Francisco is only a 45-minute flight away, making it accessible to SF clients. "It is less than most peoples’ commute to their office," says TBWAChiatDayLA's Brent Anderson.

"Los Angeles is one of the few places in the world one can have a career in advertising and have a backyard," says Anderson, adding that poaching talent has become easier now that Los Angeles is experiencing a creative renaissance. "Our director of talent knows when to place calls [to East Coast executives], particularly now [October] and March and April," says Anderson. "Weather will always be an advantage for LA."

The key to LA's creativity surge is attributed to its unique geography, climate, welcoming economy, and culture. Sprawl may also play a role in helping to make LA an advertising powerhouse. "The notion is space is very important to the creative process," says Netflix's Laurent Janneau. "We are so very far away that we don't give a shit what Europe thinks. There is some kind of competition and judgement between Europe and East Coast [that doesn't exist on the West Coast]. There are some drawbacks, but there are a lot of positive things to have the psychological freedom."

Los Angeles also benefits from a key complaint about San Francisco -- that it’s pretty much a tech town and not much else. By contrast, Los Angeles' diversity enables other industries to thrive alongside one another. "New York is very dense, while Los Angeles is very spread out. You will always be able to find pockets to find the pure [creative] drive," says Janneau.

Although LA may be hot right now, it can be argued that the City of Angels has always held this promise for new opportunities, says Anderson. "This promise is absolutely right in line about the history of the west and California. This idea of optimism that California represents. It isn't new but rather a reawakening."

advertising week, agency, los angeles
3 comments about "Is LA The New Center Of The Ad World? ".
Check to receive email when comments are posted.
Read more comments >
Next story loading