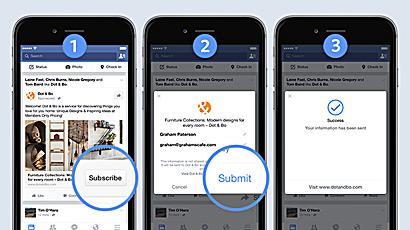 After what it’s calling a successful trial run, Facebook is rolling out lead-generation-based mobile ads to all interested parties.

From newsletters to price quotes, the ads streamline the process of signing up to receive information from advertisers. When users click on a lead ad, for instance, a form opens with their contact information already inserted -- so long as they gave Facebook that info beforehand.

Since June, a number of brands have been putting the ads to the test. Land Rover used the ads to invite potential customers to request car quotes. In A/B tests, the ads outperformed standard link ads in terms of total leads and conversion rate, according to Kim Kyaw, manager of digital marketing and social media at Land Rover.

So long as advertisers agree to work with one of Facebook’s approved marketing partners, they can also now track and react to leads in real-time. These partners include Driftrock, Marketo, Maropost, Oracle Marketing Cloud, Sailthru, and Salesforce.

To learn more about their target audiences, businesses are also being encouraged to customize their ads with open-ended or multiple-choice questions.

Advertisers can also include a customizable disclaimer, so companies with pre-approved legal language can more easily include it in their lead ads.

In a nod to personal privacy, the ads invite users to edit their contact information before sending it off to businesses. In fact, users have to click “submit” before their information is released.