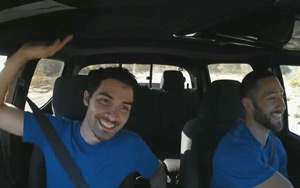 Can Toyota find new space in the reactivated market for mid-size trucks? One big opportunity is among Latinos. They are the growth demographic for all new-vehicle sales, and particularly for trucks. According to IHS Polk data from last year, Hispanics were 35% of Toyota's sales.

Retail sales to Hispanics rose 15% last year among Hispanic consumers, versus 6% for the whole market, per the firm. No wonder they represent a key demographic for the Millennial-focused campaign for the new Toyota Tacoma pickup. Toyota has been the top brand among Hispanics for years, and the percentage of sales to Hispanics of Tundra and Tacoma is higher than for other truck brands, including Ford, of whose total truck sales to Hispanics (albeit three years ago) was only about 1%, according to J.D. Power.

The general market creative shows young men and women frolicking in the desert, with the message “Play Now.” The Hispanic campaign is more about taking time off with family and friends to have fun. And the general-market advertising has some of that imagery, albeit sparely, as well.

The overall campaign comprises two broadcast spots using pro motocross riders and stunt people, with the second one featuring thrill-seekers. The social campaign targets consumers by focusing on people into BMX racing, dirt bikes, ATV, snowboarding and snowmobiling, while Instagram activations use slow-motion video, shot in bullet time with 4k technology, about the grittiness of the Tacoma in off-roading action from different angles.

The Hispanic-focused campaign, via Conill, changes the conversation to address the fact that, for Latinos, trucks are mostly for work and business. The idea is to encourage them to try a different way to drive. The message, “Sal a Jugar” (Go Out & Play) is about hard-working Latinos (sorry, Donald), rewarding themselves by seeking adventure. In addition to advertisements, the Hispanic campaign does something the general market does not: a real-people, real-world challenge where three teams don wearable technology and hit the outback in Tacomas. They are competing to see who is having the most fun versus stress based on their biometric responses, as they kayak, off-road in the Tacoma, camp, bike and do various tasks using the truck.

Conill Group planning director Jennifer Dellapina tells Marketing Daily that both the general market and Hispanic effort reflect the nature of Toyota's agency structure -- a relatively new paradigm called T2 that switches a hierarchical agency structure with a collaborative one between Toyota's agencies. “We are working together. Our campaign is slightly different, but it's the same takeaway.”

Dellapina says Conill also had a subtle influence over the general-market campaign. "The highly acculturated Hispanic audience is also watching mainstream TV; so they are seeing the general market campaign, as well. It’s not a disparate message.” She says that Hispanic consumers are more family oriented, and in one of the general market ads, a father is seen photographing his young 20's sons, or a son and a friend, doing snowboarding stunts down a bannister.