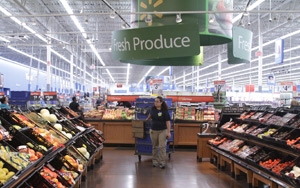 Wal-Mart Stores has unveiled a new three-year strategy to strengthen its e-commerce offerings, including a $1.1 billion investment for fiscal 2017. But in a presentation to investors, it also says its sales are flat, with lowered growth-rate projections and earnings estimates. Wall Street’s reaction to the plan wasn’t just thumbs down, but a huge raspberry: At one point, the stock fell to its lowest level in 15 years.

The company reiterated its commitment to becoming an e-commerce powerhouse, capable of bringing online shopping to mainstream America. It also unveiled a new TV spot intended to encourage “buy online, pick up in stores” shopping.

“Our investments in our people, our stores and our digital capabilities and e-commerce business are the right ones,” says Doug McMillon, president and CEO, in the company’s announcement. “We will be the first to build a seamless customer experience at scale to save our customers not only money but also time."

But in presenting its three-year plan, it also says it now expects net sales growth for the current fiscal year to be more or less flat due to currency shifts -- not the 1 to 2% it previously forecast. (Excluding the effect of those exchange rates, sales would have a 3% gain.) And for the next three years, it now says it expects sales of between 3% and 4%. It also lowered the amount it intends to spend on expansion, as it pares the growth rate of physical stores. As a result of its investments, earnings in fiscal 2017 are likely to fall between 6 and 12%.

Fending off Amazon isn’t easy, but Wal-Mart says it is making progress in its effort to smooth the digital paths between in-store and online shopping. Neil Ashe, president and CEO of its global ecommerce, says its shopping app now has 24 million active monthly users, for example.

And last month, Wal-Mart announced it was stepping up its efforts to defend its grocery turf, expanding its free-store pickup for online grocery orders to such markets as Atlanta, Nashville, Tucson, Charlotte, N.C., and Colorado Springs, Colo. The Bentonville, Arkansas-based retailer says that 70% of the U.S. population lives within five miles of one of its stores. “This is an idea that simply makes sense for us. We have the locations already in place, and with our website and mobile app expertise, we’re able to combine those things in a way that helps our customers save time and still take advantage of our everyday low prices,” it says.

And with its e-commerce sales growing at between 20 and 30% annually -- and operating losses in digital shrinking each year -- the overall message is that its investments are paying off, but will take time.

But the investing community isn’t inclined to be patient. “Investor sentiment remains among the lowest levels in our coverage as the company faces a long to-do list with no likely near-term return to positive earnings growth,” writes Paul Trussell, an analyst who follow the company for Deutsche Bank, in a note leading in to the day’s presentation. He adds that while he is resigned to Wal-Mart’s need to keep investing in e-commerce, wages, healthcare, international, pricing, and fulfillment, Deutsche continues to wait on the sidelines.

Standard & Poor's says its rating of Wal-Mart is unchanged. “We anticipate flat sales from currency headwinds and increased costs from investments in labor and e-commerce efforts to pressure profitability in the coming year,” it writes. “However, we expect Wal-Mart to continue generating strong levels of cash flow and maintain its credit metrics.”