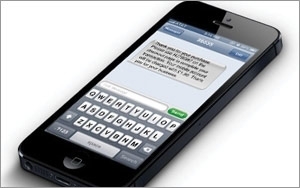 A federal appeals court on Friday revived a Philadelphia resident's text-spam lawsuit against Yahoo, which accuses the company of sending him more than 27,000 text alerts meant for someone else.

The ruling, issued by a three-judge panel of the 3rd Circuit Court of Appeals, reversed a decision by U.S. District Court Judge Michael Baylson in the Eastern District of Pennsylvania, who granted Yahoo summary judgment in the case.

The decision means that Yahoo will now have to face further proceedings in the lawsuit, which was filed in 2014 by Bill Dominguez. He alleges that Yahoo sent him thousands of unwanted text alerts over the course of several months. The messages were all intended for the phone's previous owner, who apparently signed up for a former Yahoo service that converted emails to text messages, and then sent them to users' phones.

Dominguez accuses Yahoo of violating the Telephone Consumer Protection Act, which prohibits companies from using automated dialers to send SMS messages to consumers. He said in court papers that he complained about the messages to Yahoo, but was informed that only the phone's former owner could arrange to stop the texts. Dominguez said he doesn't know the former owner or how to contact that person.

When Dominguez threatened to resort to litigation, a Yahoo supervisor allegedly replied: “So sue me.” Baylson dismissed the lawsuit last year on the grounds that Yahoo's system wasn't an "automated dialer."

Earlier this year, the Federal Communications Commission issued new regulations that appeared to include an expanded definition of automated dialers. That move by the FCC warrants returning the case to the trial judge for further proceedings, the appeals court said. "Because ... the District Court did not previously have the benefit of the FCC’s ruling in addressing the issue, remand is appropriate," the judges wrote.

Earlier this year, when Yahoo argued the case to the 3rd Circuit, a company attorney said Yahoo hadn't anticipated when it rolled out SMS alerts that users would change their mobile phone numbers without informing the company.

He added that Yahoo no longer offers the email-to-text forwarding service at the center of this lawsuit.