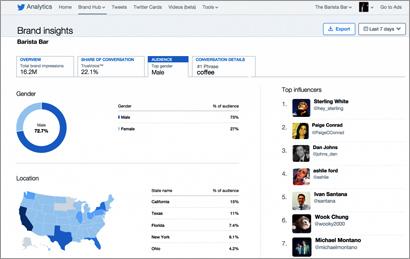 Marketers that want to measure ad effectiveness, learn about customers and track competitors can now do so with Twitter’s new Brand Hub service.

Currently available to large brand advertisers and medium-sized businesses in English-speaking countries, Brand Hub launched yesterday. The service is a “360-degree, real-time view gives the brand the opportunity to learn, take action, and see the impact of their initiatives on Twitter,” according to Twitter’s advertising blog.

One component of Brand Hub is TrueVoice, which tracks conversations by analyzing Tweets about a brand and its competitors. (On its FAQ page, the company said it determines competitors by based on publicly available competitor lists provided to the investment community.)

Twitter’s blog said the service identifies the percentage of impressions the brand owns and tracks consumer Tweets about the brand and its competitors on TV, display and social channels in real time. Brand Hub also offers information on a Twitter user’s gender, location, income levels, occupation types and other attributes in its audience view. For larger brands, the service can break down impressions by products or sub-brands.

Brand Hub is making its debut at a rocky moment for Twitter.

The company recently went through layoffs and a CEO change, and its presence as a marketing platform isn’t as strong as other social outlets, such as Instagram, which Mobile Marketing Daily reported is on track to overtake Twitter in popularity among marketers by 2017, according to a new forecast from eMarketer.