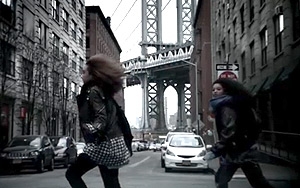 Big publishers have been striking major branded content deals at a breakneck pace in recent weeks.

In the latest such agreement, Condé Nast’s in-house branded content studio, 23 Stories, has partnered with Cadillac to create and distribute editorial and branded content highlight the luxury car brand.

Under the terms of the deal, 23 Stories is creating over 50 pieces of custom content, tied into Cadillac’s new “Dare Greatly” campaign, including articles and long- and short-form video, which will be distributed across Condé Nast’s digital network, as well as Cadillac’s own online and social channels.

In an unusual twist, the campaign created by Condé Nast for Cadillac involves content about Condé Nast itself. The video component includes short films telling the stories of Condé Nast editors who have pushed the boundaries of their medium at publications including Condé Nast Traveler, GQ and Vanity Fair.

The new campaign comes as Cadillac owner GM is trying to inject some new life into the venerable auto brand, which has failed to keep pace with foreign competitors in recent years. U.S. sales declined 1.7% in the first nine months of 2015 compared to the same period last year, the car maker disclosed.

As noted, this is just the most recent in a series of ambitious branded content campaigns from publishers who are taking many production responsibilities in house.

Earlier this month, Guardian unveiled a three-month-long, 39-part multimedia series, including video, audio, text, images, and infographics for Squarespace, the Web site publishing platform. The series, titled “Side Hustle,” examines the world of creative professionals who are pursuing their passions with side projects, hoping to make it big in their spare time.

Also this month, women’s interest publisher Meredith Corp. revealed that it is working with paper product manufacturer Georgia-Pacific for a major branded content push, which will run for a year and feature around 1,400 pieces of custom content, including infographics, articles and slideshows.