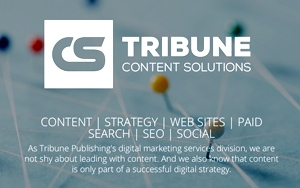 More and more publishers are bringing branded content creation in-house, hoping to leverage their creative expertise to capture dollars that usually go to agencies. Tribune Publishing got into the game with the launch of Tribune Content Solutions, an agency within the company that will create multiplatform campaigns for local and national advertisers.

The new division includes editors, writers, marketers, strategists and tech specialists. It will be led by Dan Hickey, who previously led development of Tribune’s digital marketing services and has now been appointed senior vice president of revenue development, innovation, and customer marketing.

Hickey will also be responsible for marketing efforts for Tribune’s national sales group.

According to Tribune, the company has created native advertising and branded content campaigns for over 70 clients this year.

While most attention has been focused on native advertising at the national level, newspaper publishers in particular are tapping into growing demand for native ad solutions from local advertisers. However, this area of opportunity also presents additional challenges, including getting clients to see the utility of more sophisticated native ad approaches, offering real value to readers rather than simply promoting their businesses.

As noted, Tribune is just the latest in a series of publishers launching their own branded content outfits. In August, Time Inc. launched The Foundry, a new cross-channel creative shop focused on content and intended to help launch new brands. In July The New Republic launched a new in-house content marketing agency called Novel.

Earlier this year, in February, Billboard and The Hollywood Reporter unveiled Adapt Studios, a branded content division that will help brands reach consumers in entertainment and music contexts. And in January, Condé Nast launched 23 Stories, which allows advertising clients to tap into the expertise of the publisher’s own editorial teams. The New York Times’ native ad division, T Brand Studio, launched back in January 2014.