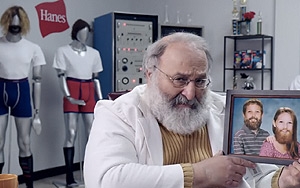 The market for high-technology apparel has been heating up. Hanes is addressing that, literally, with an extension to its digital advertising for the X-Temp line of T-shirts, socks and underwear for men, designed to keep body temperature relatively low despite external heat.

The company launched X-Temp last year, with social video guy Logan Paul, who has a few million followers of his short-form videos on platforms like Vine, Instagram and Twitter. For Hanes he created short videos to attract Millennials, around how the X-Temp products keep wearers cool. The company also touted the line with long-time spokesperson Michael Jordan.

This summer, Hanes continued the humor with a digital campaign featuring guys with body hair and a fictive hair scientist, with the idea that X-Temp keeps hair heat under control.

The new program is timed with Movember, a month-long global campaign funding charities around men's issues, such as prostate cancer and mental health.

The campaign has an old-school offline element: a phone hotline (1-844-4COOLNOW) that involves a humorous phone tree of such audio effects as “cool” sounds, and “cool” music. There is also a tongue-in-cheek social component. As the Movember promotions include encouraging men to grow facial hair, Hanes is presenting sponsorship of the National Beard & Moustache Championships on Nov 7. That aspect of the campaign builds on videos and other content for this past summer's Facebook and Twitter effort. Hanes brought in 360i, production house Über Content and Spark for the campaign. 360i did the work on the hotline, Spark helped with the National Beard & Moustache Championships sponsorship. The Martin Agency is Hanes' AOR.

The market for high-tech undergarments is ramping up with sports products under brands like Jockey’s Microfiber performance underwear, UnderArmour, and smaller brands like Mac Wheldon’s Silver Series.