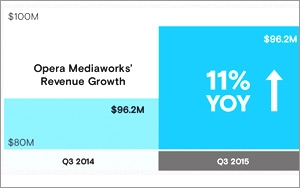 Opera Mediaworks, a mobile ad platform under the umbrella of Opera, reported Q3 financial results today, with most of their revenue thanks to mobile video ads on their network.

Around 57% of the company’s revenue comes from mobile video, up from 46% at the same time the year previous. Mobile video is expected to continue its ascension as an ad format into Q4.

The company reported revenue of $96.2 million up 11% YoY, accounting for much more than half of parent company Opera’s $149.4 million total revenue.

Performance business, or ads that are only paid for when the results are measurable, also grew, accounting for 49% of business, up from the 47% it represented in Q3 2014.

Opera Mediaworks has increased its international business as well, becoming less reliant on its North American revenue core. By region, 62% of revenue comes from North America, 25% from Europe and the Middle East (EMEA), 8% from Asia Pacific (APAC) and 5% from Latin America (LatAm).

The company also announced a partnership with AT&T AdWorks this week, launching a trial run of integrated addressable advertising campaigns across TV and mobile devices.