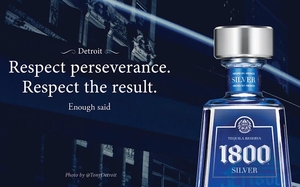 1800 Tequila has partnered with Detroit Instagram user Tony Majka, also known as @TonyDetroit, for the inaugural installment of its new 1800 Visionaries campaign.

Created by The VIA Agency, this social media and out-of-home campaign features imagery captured by Tony Detroit that salutes the toughness and perseverance of the city of Detroit. Fifteen billboards showcasing the 1800 Tequila-Detroit inspired artwork are being unveiled throughout the city of Detroit. The imagery will also be shared with Tony Detroit’s 400,000 Instagram followers.

Through the new Visionaries campaign, 1800 Tequila will pay homage to Detroit and its recent creative renaissance. The partnership with Majka allows local Detroiters and 1800 Tequila fans across the country to experience Detroit’s deep respect for creativity and innovation. The campaign aims to bring awareness to the city’s beautiful architecture.

Majka has been on Instagram since the photo-sharing app’s beginning. He had originally joined so that he could add a little more HDR to his pictures, when he thought Instagram was simply just a photo-editing app. Before long, he was posting pictures and receiving a high amount of likes and comments from other users -- he became extremely motivated and before long had a large following as his beautiful images of his Detroit hometown became a hit.

“The more I went out to capture my hometown, the more my following grew,” says the Chrysler autoworker. Shortly after joining Instagram, the Instagram community manager contacted Majka to become a Suggested User. At one point, he was the second most followed on all of Instagram.

Detroit is a big market for the liquor maker. The city was targeted for another campaign in 2008 featuring local artist Glenn Barr. Barr was one of nine artists picked to design collectible limited edition bottles. There were only 1800 of each design and they were available only at high-end liquor stores.