Looking Back On A Year Of Digital Engagement

Over the past year, MediaPost has partnered with ListenFirst to analyze companies in the Redbooks 500 ­- a group of leading companies based on a brand's revenue, advertising spend, social media engagement and other factors -- with the Digital Engagement Index, tracking a range of social engagement metrics across all the major social media channels.

Designed as a benchmark for digital consumer engagement with brands on a daily basis, we hope the DEI serves the same function in the marketing world as the S&P 500 does in the financial world, by providing a perspective on how brands are trending, while giving a reference point on how they are performing as compared to the market as a whole.

ListenFirst cofounder and co-CEO Jason Klein explained the thinking behind the project: “By analyzing these top brands, we sought to put perspective on the overall marketplace of paid, owned and earned media for major brands and for the performance of individual brands within that. The measurement informs marketers and CMOs on how to direct strategy -­ both in the short and long term ­- to drive bottom­line results.”

Having just passed the first anniversary of the project, we thought it would be a good time to look back over the first year and see if any major trends stood out. Which were the top brands overall, and what were the elements of their success? What industries dominated the DEI, and why? Following is a quick overview of what we found.

Top Brands: LEGO took the top spot in the first year DEI, with a Digital Engagement Rating of 684 million (LEGO was followed by the NFL with 645 million, and MTV with 478 million). Several factors contributed to LEGO’s dominance, including promoting branded sets like  those associated with beloved characters from Star Wars, Marvel and The Simpsons, combined with posting popular commercials on its YouTube Channel.

LEGO’s event promotions on Twitter and Instagram were the top posts of the year on those channels. The NFL, MTV, Coca­-Cola and Victoria’s Secret used this strategy with equal effectiveness to round out the top five in the category.

Sports organizations had the highest average DER per brand, while retail brands had the second highest. These categories demonstrated the effectiveness of properly ­timed engagement around cultural or calendar­ driven events. Sports organizations saw engagement peaks in early February during the Super Bowl. In addition to top retail brands like Wal­Mart peaking during “Back to School” season, engagements peaked around the Holiday season (Victoria’s Secret, H&M), with more high ­fashion retailers (Christian Dior) seeing engagement peaks in September during Mercedes Benz Fashion Week. Networks also followed this calendar ­related trend, with ESPN engagements peaking the day of the ESPYS (7/15), and Netflix engagements peaking the day of the release of the new Daredevil series (4/10). 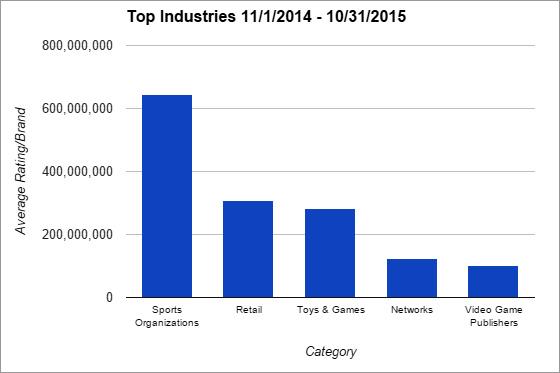 Over the course of the year, the brands tracked by the DEI accumulated a whopping 36.8 billion engagements, with overall engagements peaking in August and October, both big months for top brands like the NFL and Wal­Mart. With the NFL season in full swing, the brand relied heavily on Instagram content during game days to keep their fans engaged with all teams. Wal­Mart, on the other hand, was able to have their best month of the year from content related to “Back to School”. Although there were peaks and valleys along the way, the general trend was clearly upwards, with the total DER increasing from just over one billion in November 2014 to 1.4 billion in October of this year. 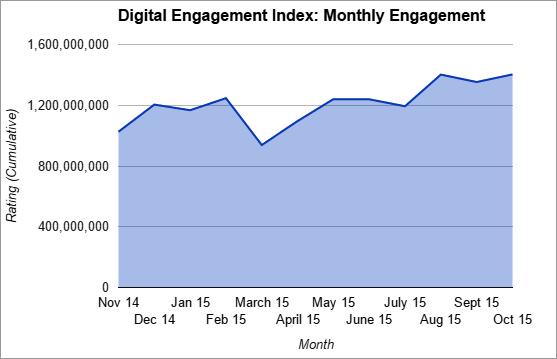 One of the simpler and more insightful scores in the study ranks the most popular brands on each of the measured social media platforms ­- an indication not only of where users expect to find a brand but where a brand’s most engaged digital audience is spending their time and energy. Facebook’s top brands measured by DER were MTV, NFL, and People magazine. Meanwhile Instagram’s top three were NFL, Victoria’s Secret, and Mercedes-Benz; Tumblr’s were Disney, MTV, and HP; Twitter’s were NFL, New York Times, and Amazon; and YouTube’s were Lego, Hasbro, and Coca-Cola.

In this case some of the winners were obvious, but others were a bit surprising. The latter category included Kleenex, which topped the Facebook leaderboard with a post about a man and his canine companion in the Messages of Care campaign. On the more obvious side, Disney was a big winner on Twitter with tweets surrounding the new attraction #StarWarsLand. Amazon utilized their YouTube channel to promote their app and it paid off in a big way, as its large number of views helped it become the top YouTube post across all brands of the year.