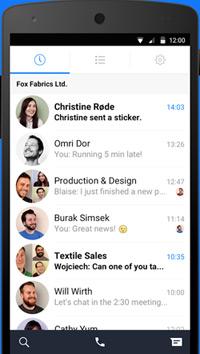 Not content with its leadership position, however, the social giant just rolled out “Work Chat” a new messaging app that is supposed to complement Facebook at Work.

Facebook officially moved into the workplace at the beginning of the year with the launch of its Facebook at Work mobile app and desktop extension. The app offers many of the same features as Facebook’s flagship network, including News Feeds, Groups, messages, and events.

The initiative comes as Facebook is looking for new growth opportunities, and messaging and business appear to be a natural fit.

More than 1.4 billion consumers will use mobile messaging apps this year, according to a recent forecast from eMarketer. If accurate, the figure will represent a 31.6% increase in usage rates, year-over-year.

Thanks to significant reach in more than 20 countries, WhatsApp and Facebook Messenger are officially "global powerhouse" apps, by eMarketer’s reckoning.