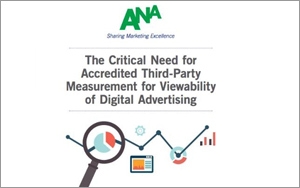 The ANA found almost all respondents (97%) believe that digital media owners’ inventory should be measured by a third party.

The need for third-party verification was reinforced by an overwhelming 90% of survey respondents who said they're not confident that their digital working media meets industry viewability standards.

And 61% of ANA respondents said they would shift their spending elsewhere if digital media owners did not provide independent measurement.

Some large media owners don't allow third-party measurement vendors to report viewable ad impressions to their clients. Instead, they use internally derived metrics that haven't been independently verified.

Currently, more than 20 firms are accredited by the Media Rating Council (MRC) to measure digital advertising viewability. Nearly two-thirds of ANA respondents  feel “very strongly” that a digital media owner should have internally derived metrics accredited by the MRC.

The ANA said it will continue working with the MRC and other industry trade groups to increase visibility on the importance of this issue and drive industry standards.

In addition, The Alliance for Audited Media noted: “The quality of the digital supply chain is only as strong as its weakest link... Marketers must take the lead by demanding the accountability and transparency that come with a third-party certification audit.”

The survey was conducted among ANA members during the summer of 2015. There were 154 respondents. 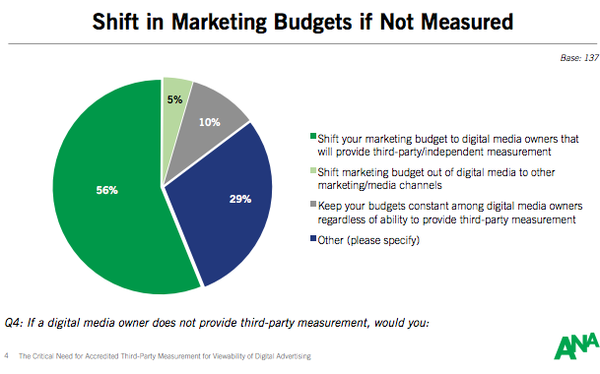 4as, ana, media measurement, viewability
6 comments about "ANA Members Call For Third-Party Measurement Of Digital -- 61% Would Shift Spending Without It".
Check to receive email when comments are posted.
Read more comments >
Next story loading