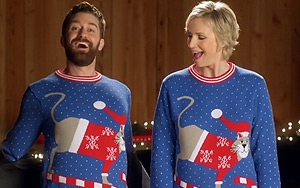 The two sing "The 12 Stinks of Christmas" which aims to show consumers how they can eliminate things that make the holidays stink with Febreze.

The video will be available all season long on Febreze’s YouTube channel. It features the limited edition Jolly Pine and Cranberry Cheer Febreze products.

The brand is promoting the effort on social media with the hashtag #12Stinks of Christmas, says Julia LaFeldt, communications manager at Procter & Gamble. The stars of the video also are promoting the YouTube video via their social media channels, inviting fans and followers to watch and share throughout the holiday season.

The brand has worked with Lynch several times in the past, including a “Funny or Die: video in 2014 that defines what it means to be “noseblind.”

“Jane Lynch is a great fit for the brand, which is rooted in wittiness and honest humor,” LaFeldt says. “Jane is also a true fan of the brand and the products, making her an authentic ambassador for our campaign.”