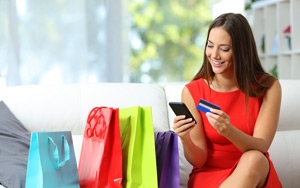 According to data from AppsFlyer, Black Friday saw a 240% jump in in-app revenue from other Fridays in November. Android also showed a bigger increase in revenue than iOS. Android in-app revenue was up 58% on Black Friday over Cyber Monday, while revenue on iOS was up “only” 42%. Similarly, sessions were up on Android by 52% compared to just 15% for iOS, and installs were up 45% and 26% on Android and iOS, respectively.

One reason for this trend could be that shoppers used their mobile devices while they were out shopping in brick-and-mortar stores, while Cyber Monday saw more at home and work getting their deals from laptops and PCs.

According to Moovweb’s figures, smartphone’s share of revenue grew 36% compared to last year.

“The shift from desktop to mobile is completely apparent this holiday season, and it will serve as a warning sign for other industries to go mobile,” stated Moovweb VP of marketing, Haresh Kumar. “And, we saw consumer behavior shift from mostly searching and browsing on mobile to making purchases on mobile at a much higher rate at all hours.”

IBM Watson tracked mobile sales, noting that sales were up 30% over 2014 on Black Friday. 45% of total traffic on Black Friday, and 36.8% of traffic on Cyber Monday (up 70% from 2014) was accredited to smartphones, which were more popular for shoppers than any other device.