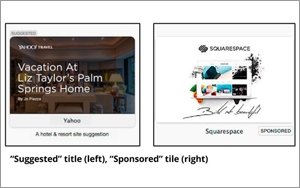 Mozilla is ending its "sponsored tiles" ad initiative, which allowed marketers to serve targeted ads to people who use the Firefox browser.

"Advertising in Firefox could be a great business, but it isn’t the right business for us at this time because we want to focus on core experiences for our users," Darren Herman, vice president of content services for Mozilla, wrote Friday in a post on the company's blog.

He says Mozilla will honor its commitments to advertisers as it winds down the sponsored-tiles "experiment" in the coming months.

The "sponsored tiles" ad platform, which only launched several months ago, categorized Firefox users based on their browsing history, and then showed them "tiles" from marketers who wanted to reach specific segments. For instance, a Firefox user who frequently visits sites operated by various clothing retailers might have been placed in a clothes-shopper category, and then shown a “suggested tile” from a store that he or she doesn't typically visit.

In September, Herman told MediaPost that sponsored tiles were performing well. "Engagement rates and the clickthrough rates we are seeing are performing at a pace that’s on par with paid-search campaigns," Herman said at the time.

Mozilla touted the tiles program as privacy-friendly, noting that users could edit and delete their browsing history, and could also opt out of the program altogether.

Denelle Dixon-Thayer, Mozilla's chief legal and business officer, says in an email that Tiles "was an experiment that worked."

But she adds, "it isn't the right business for us at this time."

Last month, while Mozilla was still offering "tiles," the company rolled out a new ad-blocking tool for Firefox. The "Private Browsing with Tracking Protection" setting "actively blocks content like ads, analytics trackers and social share buttons that may record your behavior without your knowledge across sites," Nick Nguyen, vice president of Firefox Product, wrote in a blog post.