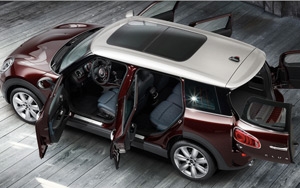 Since launching in the U.S. in 2002 the Mini Cooper automotive brand has grown -- and not just in sales volume. It now has a five-vehicle lineup, or will once it launches its largest-ever vehicle -- the 2016 Clubman, which is over a foot longer than its predecessor, and over 4 inches wider. Remember, though, for Mini, “larger” gets a proviso: it's all relative. The third-generation Clubman, which goes on sale in the U.S. in January, is actually about seven inches shorter than the Mazda3, and about even with the VW Golf.

The new vehicle also reveals how Mini is taking premium seriously: Small things, like a surprisingly-difficult-to-engineer wraparound chrome element stand out, as do the new tail-light array, a focus on the use of materials like Chester brown leather, a cool ambient lighting setup, including a Mini logo that projects onto the ground when the driver’s door is opened, and a lot more. Tom Noble, who came over to Mini from BMW Australia last year to head up brand communications at the Woodcliff Lake, N.J. U.S. office, speaks to Marketing Daily about the new vehicle, new imperatives and new challenges.

A: It has always been a premium brand. When it first launched it was the only premium small car, though others have come in. For people who have grown up with Mini, price is the issue. They are creative people who want something different, interesting. But, as all cars have gotten better since 2002, we need to stay ahead of that curve from a quality and design standpoint, because you aren't going to always “out technology” people. And we have to present that with context around design.

Q: How about punching above your weight in media? Super Bowl ad for the the New Clubman perhaps?

A: You never know…look, for us to show up in the Super Bowl, we’d better have something interesting to say, not just show a car, but make a statement about what we stand for.

Q: But everyone knows Mini, I would think, and gets the brand pretty well…

A: We still have an awareness issue. And even where we have great awareness, you have people who are 40, or 35, who now have kids, who love their Mini, but had nothing to move up to, and don’t know the vehicles. So we have 25- to 32-year-olds, and 55-plus, that’s our audience. We have (until now) missed those in the middle, both because of the product range and because we may have been too “cute.” For a 40-year-old architect, Mini may seem a bit too frivolous as a brand. And yes, there is also an awareness issue.

A: There's an awareness problem because most people think of Mini as a really small car. 'I may or may not be aware, and if I am, I think of the brand as a two-door hardtop.' Awareness of Countryman [Mini's formerly largest car] is not too high. Awareness of the Mini four-door is growing. So, besides there being an awareness issue overall -- perception of Mini is really focused; a lot of consumers don't know the product range. And remember, Americans didn't grow up with Mini.

Q: Are you limited by your media budget?

A: We do a lot of digital and we have a fairly healthy TV budget in shows that kind of matter to our target. We will spend a lot of money on the Clubman -- we’ll put money behind it, because it's also a new category for us. There is whole segment we have just entered with Clubman, vehicles where you can do things like get three kids in the back.

Q: What do Mini customers really care about that drives them to Mini?

A: Authenticity and purpose. That really matters to people who buy our cars. And I think it's something inherent in our brand — it's the whole concept of "Mini-ness": "you don't need this much, when you can have this much." In other countries people buy as much car as they can get away with. In America you buy as much as you can afford.