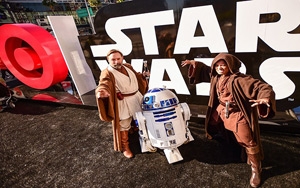 As the known galaxies brace for further Star Wars mania, Target is making sure it gets its fair share of the Jedi universe.

Besides its Share the Force campaign, which has been uploading fans favorite memories since it kicked off earlier this fall, it also hosted the Target and Star Wars Galactic Experience at L.A. Live, a free event that helped Angelinos get ready for the opening of “Star Wars: The Force Awakens” this week.

Among the four domes of attractions: A Galaxy Show Dome, which takes families on virtual adventures via a light show, with favorite characters created out of stars. Visitors got bracelets designed to interact with music and visuals, including swooping X-Wings and TIE Fighters. Another dome features LEGOS, and another, Galactic History. And in the Use The Force Dome, fans can use an iPad and headset to experience some Jedi mind tricks.

At this point, it is hard to put the film’s expected success in perspective. The Los Angeles Times reports that "The Force Awakens" is likely to pull in between $175 million to $250 million in the U.S. and Canada its opening weekend, unprecedented for a December film. (“The Hobbit: An Unexpected Journey” holds the record, with $85 million.) And if it hits at least $200 million, the Times reports it will be on track to gross $2 billion, achieved only by 1997's “Titanic”and 2009's “Avatar.” “The Force Awakens” and its four successive films may generate $5.5 billion or more at the box office.

And the Hollywood Reporter says merchandise sales linked to the Disney film may reach $5 billion. Amid all that merchandise, Target says its Remote Control BB-8 is already a big hit with its customers (and starring in one of its holiday spots.)

Even a church is diving in, with the Liquid Church of Morristown, N.J., promising to devote its Christmas services to the franchise, including “New Jersey's only live Star Wars Nativity Scene.” Guests can heft a light saber, and kids get to sit in Darth Santa’s lap, and be photographed with Stormtrooper "elves." Services include characters in costumes, clips, and music.

The official trailer for the Disney film has already been viewed more has more than 70 million times.