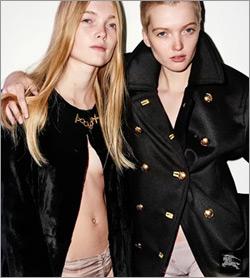 Burberry may be one of the oldest names in trench coats, but it’s flexing its digital edge in all kinds of new directions.

Its new campaign, set to break early next year, features young (and barely dressed) models who look as if they stepped straight out of your teenage babysitter’s Instagram feed. And it has also announced an innovative 3D partnership with DreamWorks, as well as a fun new project with Google.

Instead of well-known models (Burberry often uses instantly recognizable faces like Kate Moss and Cara Delevingne), and its usual high-gloss luxury look, the new ad campaign has a raw, candid look. It stars a handful of fresh faces, including Dylan Brosnan (the son of actor Pierce Brosnan), Eliza Fairbanks, Misha Hart, sisters Ruth and May Bell, and Liam Gardner. The campaign was shot by fashion photographer Mario Testino and directed by Burberry CEO Christopher Bailey.

The company is also partnering with DreamWorks Animation and NOVA, in what it claims is the first interactive luxury marketing campaign that uses 3D technology. The out-of-home effort uses computer-generated versions of its heritage scarf, which users can personalize and then play on the famous “Curve” screen in London’s Piccadilly Circus. It allows up to five users to experiment with the scarves on their cell phones and then use their devices to control how it flies around on the big screen. (They can then buy the scarf online, or get directions to Burberry’s nearby flagship.) The OOH experience is scheduled to run through the end of the year.

Last month, the retailer also announced “The Burberry Booth,” a partnership with Google that gives fans another high-tech way to interact with the brand. Using real-time video stitching, it lets customers create a personalized version of its U.K. Festive holiday campaign. (That film, which recreates the opening scenes of “Billy Elliott”with plenty of plaid and star power, including Elton John, Julie Walters, Naomi Campbell and Michelle Dockery, has already racked up more than 12 million views on YouTube.)

Customers enter the booth, jump and then get a 15-second version of the spot that includes them, which they can share across social channels. Burberry, which boasts 38 million followers on 19 social media platforms, has hooked up with companies like Apple Music, Snapchat, LINE and Kakao, partnered with Google for its powerful 2013 “Kisses” campaign, which allowed users to send smooches via the Internet.