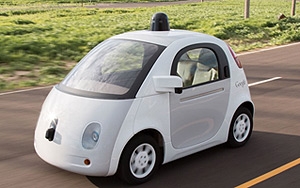 Google's driverless car project, which began as a side project in 2012, will spin out under its own company under parent company Alphabet. A report by Bloomberg places the timing in 2016.

Co-founders Sergey Brin and Larry Page announced Alphabet in August with the intention of creating subsidiaries for projects other than Google's core focus -- advertising. Under Alphabet, each company is likely to get its own CEO.

Google’s cars have logged more than one million miles on public roads, mostly around San Francisco and Austin, Texas. The fleets --  which would include a range of vehicles -- could initially land at confined areas like college campuses, military bases or corporate office parks.

When the project spins off into a company it will need a business plan, which could lead it to offer rides for hire -- similar to Uber and Lyft.

The proposed company already has a lead. John Krafcik, an auto-industry veteran, took the role of CEO of the car project. Krafcik was then working as president of TrueCar at the time, but his LinkedIn profile still shows he is there as director. Krafcik also has experience as a senior sales executive at Hyundai Motor Co., and a truck engineer at Ford Motor Co.

It's no surprise that reports have once again surfaced that Google is likely working on a Uber rival, but at the same time there has been an exodus from Google to Uber. Manik Gupta left Google Maps after seven years to join Uber as the director of its mapping product.

The biggest challenge Google faces involves the lack of a driver behind the wheel and those who regulate travel not trusting software to get from point A to point B safely every time. California released a set of draft rules Wednesday that would slow access to self-driving cars without a driver until regulators are confident the technology is safe, per the Associated Press.