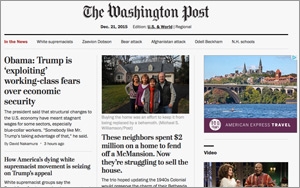 The Washington Post is introducing new native advertising formats that integrate editorial content with branded messages more closely, while maintaining the distinction between the two. This week, the newspaper revealed another new online ad format, “InContext,” that matches native ads with relevant editorial content in the form of highlighted quotes.

For example, one of the first InContext ads appears in an article about ready-to-cook meals by celebrity chef Mike Isabella. The ad links to a piece of branded content about cooking sponsored by JPMorgan Chase & Co. That article, in turn, links to more branded content JPMorgan Chase, as well as other kinds of information.

InContext identifies quotes for contextual linking automatically using proprietary technology developed by WaPo, with a focus on personalization and relevance to the individual reader.

As noted, this is just the most recent in a series of new native ad products from WaPo.

Last week, the newspaper unveiled a new native ad format, called “PostPulse,” which allows advertisers to recommend relevant content elsewhere on the WaPo Web site, based on the context of the article the reader is currently viewing.

In an example provided by the newspaper, the inaugural Wells Fargo campaign features a native ad placement in an article discussing the expected increase in interest rates by the Federal Reserve.

The ad consists of a carousel presenting editorial recommendations for additional reading on financial topics, sponsored by Wells Fargo and featuring branding from both the bank and newspaper.

Users that click on an article in the editorial carousel are then shown a landing page with the content sponsored by the advertiser. PostPulse presents additional editorial recommendations in the right rail, allowing the advertiser to extend the experience and deepen user engagement.