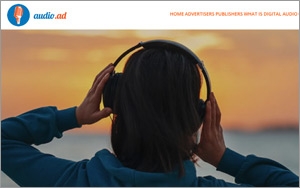 Benjamin Masse, SVP/GM of advertising at Triton Digital, said Audio.Ad is willing to try new things, and most countries in Latin America are pushing hard to spearhead innovation.

"[Agencies in the area] want to show the U.S. and other advanced programmatic countries that they know what to do," Masse said. "They're really bright and willing to experiment." He added that he wants to make sure audio is not seen as an emerging channel but rather on par with other digital mediums.

One opportunity going forward is mobile audio streaming, Masse said, especially with so many Latin American mobile and smart-device users. (eMarketer predicts 434 million consumers will own and use mobile phones across the region by 2018.) "As soon as we reach that position, it will be good for the publisher," Masse said. "I don't know if it will take a quarter or three years. It's a huge market, and there's a lot of willingness to make that happen."

Audio.Ad, part of Cisneros Interactive, was founded in 2014 and claims to reach more than 55 million unique users. The company has offices in Argentina, Mexico, the U.S., Colombia, Peru and Chile.