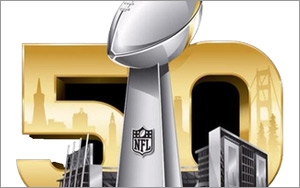 With commercials priced at almost the $5 million mark for a 30-second commercial, the big sport event on CBS on February 7 could hit more new record levels for advertising revenue, according to media buyers.

Kantar Media says the 2015 game witnessed total revenue for the event at $345.4 million, with a 30-second commercial scoring an average of $4.4 million. The media research company says there were 82 commercial messages in 2015 totaling 48 minutes and five seconds of advertising time.

That's down from the two previous years (49:15 in 2014) and (51:40 in 2013). Although the trend is for shorter commercials in overall network prime-time programming, Kantar Media says advertisers opt to spend even more by running longer-length commercials -- all this to deepen a story line for engaged viewers.

Kantar says by comparison, the normal proportion of long-form ads on broadcast networks is about 6%.