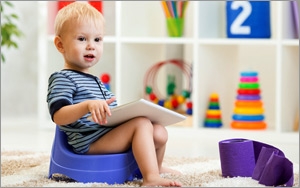 With pediatricians warning parents against letting too much technology into kids’ lives, new research from NPD Group finds that children still spend a surprising amount of time with traditional toys.

The study reports that parents say 87% of kids between the ages of 0 and 14 engage in some kind of traditional play each week, like dolls, board games and arts and crafts. And 85% take part in technology play.

But kids do begin to ditch those familiar standards as they grow: While 88% of preschoolers (those between 2 and 5) play with traditional toys during a typical week, only 52% of tweens (ages 9 to 12) do.

The results were a little surprising to Juli Lennett, NPD’s U.S. toys industry analyst, who says that she didn’t expect to see traditional play holding up quite so well against the onslaught of tech. But she was also taken aback by just how soon very little kids are getting digital. “I was surprised that about 15% of babies (ages 0-1) are on mobile devices in an average week,” she tells Marketing Daily. “That’s about 600,000 babies!” And about 33% of preschoolers play games on a mobile device at least once a week.

While the toy industry keeps cranking out tempting tech offerings for kids of all ages, it remains a major source of parental angst. The American Academy of Pediatrics, in what may well be the most ignored bit of medical advice ever, currently recommends that children under two not be exposed to any electronic device -- even TV -- and that screen time for older kids be limited to two hours per day. (Those guidelines are currently under review.)

And Lennett says previous NPD research confirms that conflict. “Parents of kids ages 6 to 9 seemed to struggle with this the most, with 68% of these parents saying they limit time on devices and 58% saying they like the ‘touch and feel’ aspect of traditional toys.” And 72% of parents think technology has made their kids lazy while 61% think their kids are too connected.

This study finds that mobile is having a strong impact on how kids consume media. Among those who watch media, the average child spends about 6.7 hours per week watching traditional TV and 4.3 hours watching video on mobile devices.