AOL Advertising's Marta Martinez: 'We're Looking To Market To People, Not To Devices' 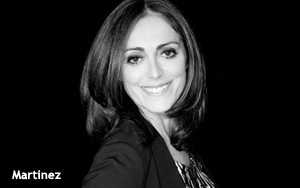 RTBlog had the opportunity to speak with Marta Martinez, SVP, AOL Advertising. Martinez leads AOL’s advertising sales organization, where her mission is to simplify marketing for AOL’s clients. Yes, to simplify it. She’s doing that by educating clients on a holistic approach to programmatic advertising including mobile, video and TV experiences that have data at the core.

Named to her role in June 2014, Martinez previously served as global head of video sales, where she oversaw all sales and strategy for AOL's video offerings. She’s not new to programmatic media. In fact, she’s been working with it since 2006, first at Havas Digital, then at MediaMath and in consulting roles.

Since Verizon’s acquisition of AOL last year, Martinez’s role has become more wide-ranging, demanding that she level the silos that exist within AOL and its clients between online and offline media, social and mobile teams, and more. But if anyone’s up to those tasks, it’s Martinez.

She spends her days educating clients about programmatic media options, including ONE by AOL, the company’s cross-screen programmatic advertising platform that incorporates multitouch attribution; making connections between all the moving parts and pieces within AOL; making the most of key assets like Millennial Media and Microsoft’s advertising business; and coming up with ways to tap into and work with Verizon’s insight-rich data cache.

The following conversation was lightly edited and condensed.

RTD: How do you hope to use Verizon’s consumer data to help enrich AOL’s understanding of consumers?

Marta Martinez: At the core, we are looking to market to people, not to devices. That’s the key. The world is mobile. Verizon gives us the ability to leverage "people-based" information and to understand how many people are in a household, how many devices are attached to each individual in the household, and to analyze individuals’ interactions and behaviors across devices.

Do they spend more time on email apps on the phone? What happens inside the application? When they leave home and go to the office, we recognize them as well. We have a pretty good understanding now of what people are doing across devices. We want to use the insights to create sequential messaging and do creative optimization on behalf of our clients.

We are beta-testing all the different data sets for marketing programs. With Verizon, we can do this at scale. Verizon has FiOS internet service, wireless service, TV and more. It’s offering us different types of data than we’ve ever used in advertising. We get to understand consumer behavior, and then we can optimize our advertising content by using this data. I would say we’re only in the first inning of personalized advertising.

We’ve done a phenomenal job of laying down the plumbing, but we’re still trying to understand the data that comes from the infrastructure in terms of programmatic TV.

One challenge is that programmatic TV can’t leverage digital data at scale yet. Data on TV still only goes in one direction. The ability to collect and leverage data is a lot more limited with traditional TV.

RTD: Can you offer an example of what AOL is doing in programmatic TV?

Martinez: We have a programmatic initiative in Australia with our partner MultiChannelNetwork (MCN). The company represents about 85% of the pay TV inventory in the country. In terms of growth, MCN saw revenue attributed to programmatic TV move from 1% in its launch month (May 2015) to 5% by the end of the year. In terms of what's next, we are exploring how digital video and TV are traded closer together, eventually combining those two execution layers into the same platform.

RTD: Programmatic mobile is a key focus for AOL. What’s the potential there?

Martinez: With our Millennial acquisition, we’re able to work in the app environment. We’re able to follow the consumer via app usage so that our advertisers can understand the signals consumers are leaving across devices. This offers us a holistic view so we can do more data-driven marketing. Mobile devices are our best proxy for consumers -- you can see how they spend their day. We will reinvent mobile advertising.

RTD: Thinking ahead, what will AOL’s focus be for the digital newfronts and the traditional broadcast/cable upfronts?

Martinez: Last year, we saw programmatic TV begin to take a role in the upfronts. All the networks started talking about it. My prediction is, we’ll actually see programmatic TV buying happen this year. Of course programmatic TV means different things to different entities. Data-driven TV will enable marketers to optimize their advertising more quickly. We’ll also see the newfronts and upfronts coming more together. There’s a "we," not an "us" [traditional media] or "them" [digital media].

RTD: Your mission is to simplify advertising for your clients. How is AOL doing that?

Martinez: For starters, we have ONE by AOL One. It’s a single platform for advertisers and publisher, and it simplifies the use of data in real time. We will build specific programmatic TV capabilities into the platform. We’ll be the Bloomberg terminal of marketing, and we’ll do it from a mobile device.

RTD: What would you say are your three most important business priorities for 2016?

Martinez: No. 1 is figuring out what a mobile-first cross-screen advertising program looks like. A consumer is defined by how they behave across all screens, all devices.

No. 2 is, how do we service advertisers globally? We need partnerships throughout the global advertising ecosystem.

No. 3 is to help our partners and the industry understand the meaning of open infrastructure, and it brings all assets together. We believe that everything that you build must be based on an open API. Working with the data side of the house, we want to grow the total digital pie. How do you look at the market holistically?

RTD: What are your thoughts about the challenges around ad blocking?

Martinez: Ad blocking will force us to create something that brings value to advertisers. Ad blocking is a backlash because we haven’t been smart enough as an industry to create ads that add value. Ad blocking is going to force a creative renaissance. We’re starting to be able to leverage programmatic technology to drive new insights and establish what advertising looks like in the future. I envision a future where people love advertising.

RTD: What role does editorial content play in your programmatic, data-driven marketplace?

Martinez: Verizon has Go90, a mobile-only content service targeted to millennials. We consider it the future of TV for millennials. They’re interacting with TV via mobile devices -- the content is shareable and represents an expression of who they are. The service is free and ad-supported. It’s allowing advertisers to see how a very flaky audience is behaving.

We’re running custom ad programs for a small group of advertisers. For example, we’re allowing advertisers to sponsor extensions to a consumer’s data plan if they go over their limit while consuming content on Go90.

With the AOL content properties, we know that consumers check the Huffington Post all day long and Engadget if they’re in the market for new headphones or something like that. I see no reason why you wouldn’t want to leverage all the different pieces of content. We’re a media tech company -- and a data company. Content is a huge generator of data and consumer signals. There’s tremendous value in having direct-to-consumer touchpoints via content.