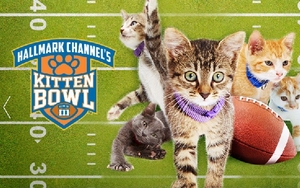 Animal lovers can find something extra to cheer about on Super Bowl Sunday when it comes to the Kitten Bowl and Puppy Bowl.

The Hallmark Channel has hired mobile messaging company Snaps to launch a kitten emoji keyboard in conjunction with its third annual Kitten Bowl.

The keyboard is now available on iOS and Google Play, and can be downloaded here.

The emojis feature all players of the kitten bowl. Users can send animated GIFs and videos. Fans are able to share kitten bowl excitement leading up to the Super Bowl and during the game, and share their faves after the game. Users will be prompted to share emojis during the game.

Pedigree, one of the main sponsors of the 12th annual Puppy Bowl along with GEICO and Bissell, is also hoping to extend the buzz around the show with a series of online videos featuring the pupletes (puppy athletes).

The video series, “What Does it Take to be a Puppy Bowl Puppy?,” features the pups preparing for the big game. The 15-second videos share a glimpse into the puplete life – from training for speed to the adorable cuddles puppies are known for.

The Puppy Bowl, which airs on Animal Planet from 3 to 5 p.m., serves as a platform for pet adoption and only included adoptable puppies during the game from shelters and rescue organizations across the U.S. and Puerto Rico.

This year, Animal Planet worked with 44 different animal shelters and rescue organizations from across the U.S. to fill the rosters of #TeamRuff and #TeamFluff with adoptable players. The network also is partnering with the Pro Football Hall of Fame to introduce the Puppy Bowl Hall of Fame to honor legacy players and promote the adoption of older "veteran" animals in addition to puppies and kittens.