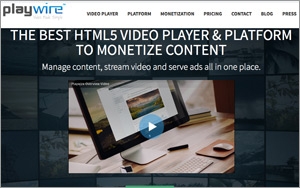 Playwire, an online video marketing platform, announced Monday that it has launched video header bidding capabilities, making it the first to market header bidding for video.

Since an initial integration of header bidding into the Playwire video platform in December 2015, the company’s U.S. publishing partners have seen an 85% lift in revenue, when comparing indirect campaigns to advertisers that use this technology.

Header bidding is a programmatic technique that gives advertisers a chance to bid to advertise on a Web page while that page is still loading. The best bid in the auction gets fed to the ad server when it's time to show an advertisement. If the bid is high enough, the ad server can pick and serve the appropriate ad immediately, leading to quick ad load times.

By letting multiple demand sources bid on the same inventory at the same time, publishers have the potential to increase their yield and make more money.

The biggest issue with header bidding is that it usually requires a complicated setup process.

But Jayson Dubin, CEO of Playwire, told Publishers Daily that publishers won’t need to do anything to activate the technology. The video player platform automatically activates video header bidding for the company’s 2000 publishing and advertising clients.

Jarrett Abello, technical lead at Playwire, clarified that header bidding is actually a “misnomer” when it comes to video.

“Our bidding technology is built into the video player, rather than requiring partners to add extra code to the headers of their sites, alleviating the biggest pain point of header bidding thus far,” Abello stated.

“This lets Playwire request bids the moment the video player loads, so that by the time a preroll ad is ready to play, bids have already been retrieved and the best ad already selected for playback,” he added.

Playwire claims that video header bidding leads to faster ad load times. It gives advertisers the opportunity "to make real-time decisions about what to bid for an advertising opportunity.”